Fagan Branch and its Cecil L. Gorley Naturalist Trail. It’s an outdoor mecca in Marion County, and a place where folks truly can find their nature.

The Fagan Branch Reservoir project was completed in 1992, is owned by the Lebanon Water Works Company, and is designed to be a secondary raw water supply backup for the Rolling Fork River.

The devastating drought of 1987 “spurred the Fagan Branch Project to be built,” said John L. “Quincy” Thomas, who worked at the Lebanon Water Works Company for 17 years as a laborer and for 23 years as its superintendent. The project spurred industrial development and community expansion in the decades since.

Fish and Wildlife Officer Cecil L. Gorley, who died in 1995, originated the idea for the trail. Dr. Joseph W. Green, who served on the Lebanon Water Works Company board of directors for more than four decades, coordinated volunteer inmates from what was then the Marion Adjustment Center, and they blazed and built the trail. Thomas said it was Frank Ballard, who was a MAC security guard and the inmate work team supervisor, who actually determined where and how the trail weaved through its 3.2 miles.

Fish and Wildlife Officer Cecil L. Gorley, who died in 1995, originated the idea for the trail. Dr. Joseph W. Green, who served on the Lebanon Water Works Company board of directors for more than four decades, coordinated volunteer inmates from what was then the Marion Adjustment Center, and they blazed and built the trail. Thomas said it was Frank Ballard, who was a MAC security guard and the inmate work team supervisor, who actually determined where and how the trail weaved through its 3.2 miles.

In 2009, the Lebanon Tourist & Convention Commission obtained a $100,000 grant that rehabilitated and expanded the trail to what it is today. The grant made possible new bridges, signage, $62,000 in blacktop for the access roads and parking zones, and steel picnic tables, trash cans and benches.

Nowadays it’s home to Canada geese, eagles and ospreys, deer, beaver and all of Kentucky’s typical wildlife, trout (stocked because of the deep, cold water), and a broad variety of fish and aquatic life. Even smallmouth bass, which were caught by Gorley in Green River and used to stock Fagan Branch.

You would not be walking this trail if not for a man named Cecil Lawton Gorley. So…who was he?

Born July 11, 1926 in the nearby Forkland area, he loved Marion County from his beginning. He spent 30-plus years as Marion County’s Kentucky Department of Fish and Wildlife conservation officer, from the 1960s into the 1990s. And he became legendary, even during his lifetime, for his honesty, his sportsman’s and woodsman’s skills, and his passion for protecting the land and its wildlife. And perhaps most of all, he became know for his passion for wanting all of us to love and protect the land and wildlife as much as he did.

“He was one of the finest people to ever walk the face of the earth,” said Shelton Young, a longtime Marion County law enforcement officer himself, and well known and avid sportsman and outdoor writer. “And what everyone would agree on regarding how he did his duties: He was fair.”

Young said everyone called him “Mr. Gorley.” Out of respect.

Mr. Gorley taught multiple generations of youth how to safely shoot a .22-caliber rifle and respect and honor good sportsman’s and stewardship traditions during years of Conservation Camps. And he ended the careers of several poachers.

In the early 1990s when the Lebanon Water Works Company began the Fagan Branch project to solve raw water shortage problems, Mr. Gorley began lobbying its board to also create recreational and fishing opportunities. As usual, he saw an opportunity for folks to enjoy nature, learn about it, and learn to love and appreciate it. In particular, he envisioned a trail.

On Jan. 16, 1995, 11 days after Cecil Lawton Gorley died, the board honored his visionary spirit and heart. They voted unanimously to name the trail after him.

In a hand-written letter to the board chairman on Oct. 19, 1994, Mr. Gorley deeply apologized for not being able to do volunteer work at the lake like he’d been doing. The radiation treatments for his cancer were simply devastating.

But in that letter is a sentence that really was written to all of us… .

“I hope the public will appreciate the lake and surrounding lands and will do their upmost to keep it clean.”

It was signed, “Your Friend, Cecil L. Gorley.”

Go to the Kentucky Department of Fish and Wildlife website at fw.ky.gov for all fishing regulations and current slot limits for largemouth and smallmouth bass, redear sunfish, and channel and flathead catfish.

That website will also have the trout release/stocking schedule.

The 3.2-mile Cecil L. Gorley Naturalist Trail is moderate to moderately strenuous in places where there are a few hills. There is cell phone service throughout the trail, but you might have to move to the water’s edge to obtain it in places.

All 47 bridges have painted numbers in two places—on the floor and on the left-hand guardrail—to assist you in determining your location.

You should carry drinking water or a filter, and trail snacks. It’s also recommended to consider carrying a first aid kit, flashlight and batteries, and weather protection gear, such as sun screen, sunglasses and rain gear.

And remember: Use the trailside receptacles for trash disposal, or better yet, carry your trash out with you! 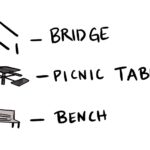 Maintenance of Fagan Branch is also dependent on volunteer efforts: Folks willing to get involved with helping maintain trails and collect garbage. If you’d like to get involved, please contact Daren Thompson at daren.thompson@lebanonwaterworks.com, or call (270) 692-2491.

In addition to maintaining Fagan Branch as a backup raw water supply source and for recreational purposes, the Lebanon Water Works Company has about 2,730 customers within the City of Lebanon, KY. In 2020, the city’s population was approximately 7,200 people, and water company customers include the city’s industries and retail businesses. The Marion County Water District is also a customer served by 12 master meters. The district has about 6,000 customers, within the county’s population of approximately 16,000.

Need to report an issue at Fagan Branch Reservoir or the Cecil L. Gorley Naturalist Trail? Well…this new feature is designed to make that easy for you. Click on the button below and you’ll be sent to an interactive map designed by the Lebanon Water Works Company. You’ll find much helpful information about the area, but within the map you can pinpoint the area of your concern and click and access a reportage box. The box will let you choose your area of concern: a bridge, trash can, trail, or bench, for instance. You can report bridge repair needs, trash removal needs, a need to remove a downed tree from the trail, and more. You can even submit a photo to illustrate your reportage. It’s all designed so problems can be detected faster, easier, better, and solutions can be implemented effectively and efficiently.
Interactive Map

How to get to Fagan Branch

DIRECTIONS: There are multiple ways to get to Fagan Branch from Lebanon, the Heart of Kentucky. Here’s the best route.The total distance is 5.8 miles, and it’s a leisurely 10 minute drive:

~Travel 1.4 miles on Sportsman Lake Road until it junctions with Fagan Branch Road and turn left.

The material and information provided by the Lebanon Tourist & Convention Commission and Lebanon Water Works, Inc. ( hereinafter collectively referred to as “we,” “us,” or “our”) herein is for general informational purposes only.  All information in this brochure is provided in good faith; however, we make no representation or warranty of any kind, express or implied, regarding the accuracy, adequacy, validity, reliability, availability or completeness of any information in our website. Always, when enjoying outdoor activities of the nature discussed in this brochure, the participant should personally investigate the current status of the trail to be used by the participant, or the water level, temperature or other relevant information pertaining to the Reservoir, as well as weather and other external factors which could affect the activity. The Cecil L. Gorley Naturalist Trail and the Fagan Branch Reservoir are each designed to exist within a natural setting and any manmade markers, structures, posted signs, or bridges on site are subject to a host of influences including the elements, the impact of current or recent weather, wear and tear from use by other patrons, and vandalism by other persons.